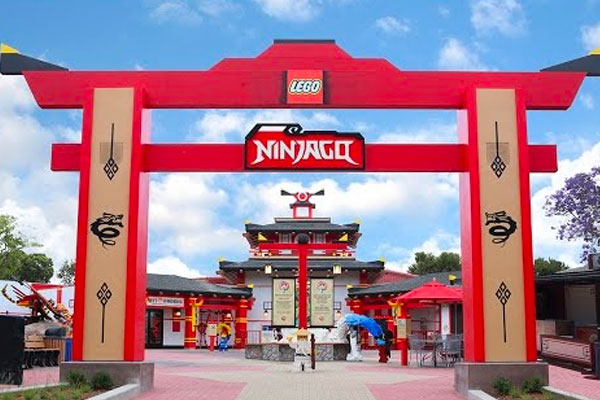 Inspired by the popular LEGO building sets and the “LEGO NINJAGO: Masters of Spinjitzu” TV show, LEGO NINJAGO World puts guests at the center of the action in lots of fun ways

Assisted by Kai and Nya, LEGOLAND Florida Resort General Manager Adrian Jones announced the land’s grand opening date on the eve of the resort’s fifth birthday, continuing the largest period of growth and expansion in its history.

Along with LEGO NINJAGO World, construction continues on LEGOLAND Beach Retreat, which will more than double the resort’s on-site accommodations when its whimsically themed bungalows open in mid-2017. Guests currently can make reservations for stays from June 1-Sept. 4, 2017, with rates starting at $182 per night. A grand opening date and associated festivities will be announced at a later date, along with additional amenities.

Jones announced that according to an economic impact analysis prepared earlier this year, LEGOLAND Florida Resort has generated nearly $1 billion of total economic activity from 2010 through 2015.

The research was conducted on the resort’s behalf by James W. Farrell, Ph.D., associate professor of finance and economics at Florida Southern College in Lakeland, Fla., who concluded:

“It is expected that [LEGOLAND Florida Resort] will continue to have a significant impact on the region as it draws visitors from around the globe to the resort. Based on anticipated construction activity over the next few years, [the resort] is expected to generate over $200 million of economic activity. As the attractions and accommodations continue to expand, it is anticipated the impact will expand as well. It is estimated that the ongoing operations will generate an average of 3,000 jobs and $271 million of economic activity per year for the next five years.”

Millions of guests from around the world have already enjoyed the fun of LEGOLAND Florida Resort, with much more planned for the years ahead. Its swift success and steady growth drew strong praise from The Ledger in an Aug. 20 editorial published by the Lakeland, Fla., newspaper:

“What tourists need, obviously, is a place to go and something to do. And it’s becoming clearer that within Central Florida [LEGOLAND] has carved out a nice niche for itself.”

“Given where [LEGOLAND] was when it opened five years ago, and especially sitting in the shadows of some of the best known theme parks and tourist magnets in the world, the transformation of the old Cypress Gardens property under [parent company] Merlin Entertainments’ guidance has been nothing short of astonishing.”

Community Manager for MyHeathrowFlorida.com. I blog, create pages and events, approve users, moderate the forums, aggregate content and keep an overall eye on things. I am managed by multiple people in the community.