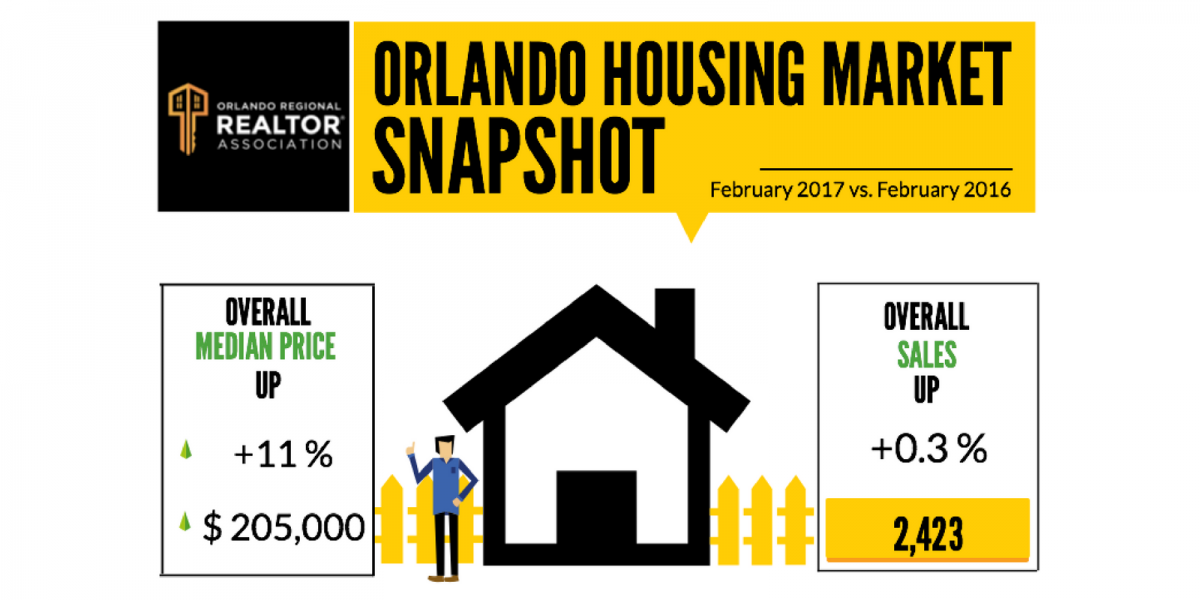 The Orlando housing market experienced increases in both median price and sales in February, while the inventory of homes available for purchase shrank by 21 percent in comparison to February of last year.

“We are headed into peak homebuying season with high demand but significantly fewer homes on the market compared to last year,” says Orlando Regional REALTOR® Association President Bruce Elliott, Regal R.E. Professionals LLC. “Lack of inventory creates opportunities for homeowners who are considering a sale of their property. This same market condition creates challenges for prospective homebuyers, who should turn to a REALTOR® for assistance in making the preparations and structuring the offers that help turn them into successful homebuyers.”

Sales of distressed homes (foreclosures and short sales) reached only 233 in February and is 57.3 percent less than in February 2016. Distressed sales made up 9.6 percent of all Orlando-area transactions last month.

The average interest rate paid by Orlando homebuyers in February was 4.29 percent, down from 4.30 percent the month prior.

The overall inventory of homes available that were for purchase in February represents a decrease of 20.9 percent when compared to February 2016. There were 21.1 percent fewer single family homes and 23.5 percent fewer condos.

Current inventory combined with the current pace of sales created a 3.49-month supply of homes in Orlando for February. There was a 4.43-month supply in February 2016 and a 3.86-month supply last month.

Sales of existing homes within the entire Orlando MSA (Lake, Orange, Osceola, and Seminole counties) in February are up by 0.7 percent when compared to February of 2016. Year to date, MSA sales are up 2.7 percent