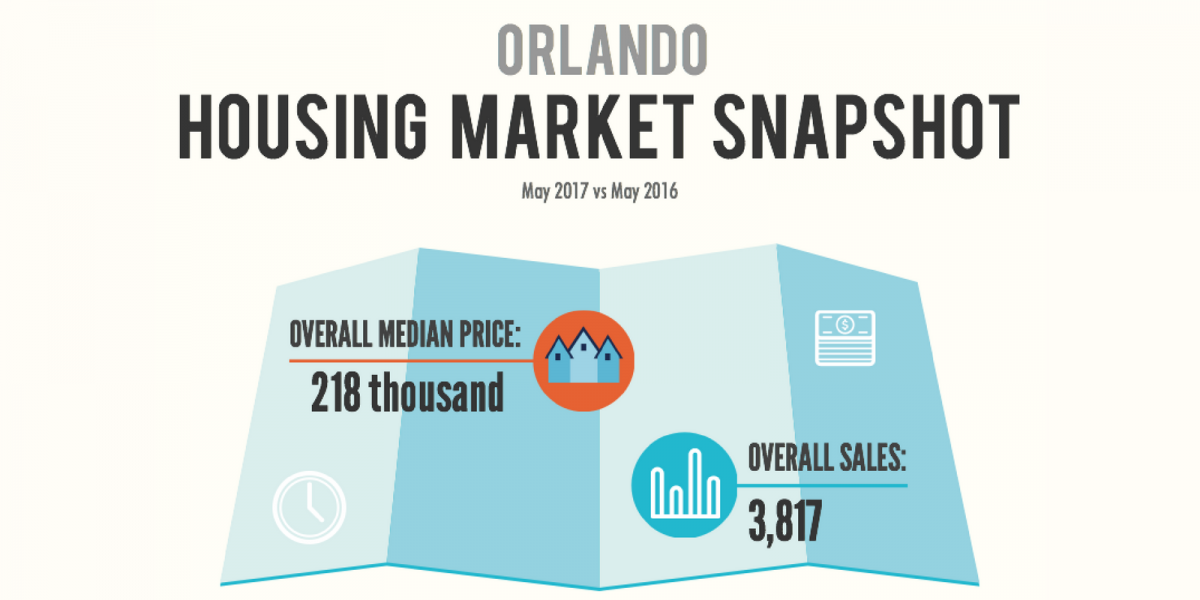 Orlando home sales increased 14 percent in May compared to May of 2016 while the median price jumped 7 percent, reports the Orlando Regional REALTOR® Association. Inventory continued its year-over-year slide and dropped by 16.8 percent, but a small relief was found in the 1 percent increase in the number of homes available in May compared to April.

“Orlando homes are selling at the quickest clip since the red-hot market of 2005,” says ORRA President Bruce Elliott, Regal R.E. Professionals LLC. “Not only is the area’s 2.30 months of supply statistic at its lowest point since September 2005, nearly 30 percent of those homes sold in May came under contract after less than eight days on the market.”

Elliott attributes the rise in sales to steady declines in the interest rate and three consecutive month-to-month positive – albeit tiny – increases in the number of available homes resulting from more sellers recognizing favorable conditions and listing their properties. “In addition, the very significant increase in sales compared to last month can be explained by an unusual dip in closing transactions in April. “The decline last month appears to be an anomaly cause in part by the later tax return deadline,” explains Elliott.

Sales of distressed homes (foreclosures and short sales) reached only 276 in May and is 31.0 percent less than in May 2016. Distressed sales made up 7.2 percent of all Orlando-area transactions last month.

The average interest rate paid by Orlando homebuyers in May was 4.09 percent, down from 4.11 percent the month prior.

The overall inventory of homes that were available for purchase in May (8,781) represents a decrease of 16.8 percent when compared to May 2016, and a 1.2 percent increase compared to last month. There were 16.2 percent fewer single family homes and 22.5 percent fewer condos.

Current inventory combined with the current pace of sales created a 2.30-month supply of homes in Orlando for May. There was a 3.15-month supply in May 2016 and a 2.81-month supply last month.

Sales of existing homes within the entire Orlando MSA (Lake, Orange, Osceola, and Seminole counties) in May are up by 9.2 percent when compared to May of 2016. Year to date, MSA sales are up 5.8 percent.